The Strength & Fitness Newsletter is a weekly email newsletter which summarises the things added to Straight to the Bar (as well as a few gems from the archives). Absolutely free.

btw, I’d love to hear your feedback – both on the individual items and the newsletters themselves. Drop a comment below the relevant issue, or swing by Twitter ( I’m @scottbird ). Ready To Learn Even More?

I love learning new skills, and the many seminars & workshops available are a great way to do that. If you’re looking for a specific type of workshop nearby, check out the ones on Dragon Door. Great mix of kettlebell and calisthenics-based offerings.


I listen to an ever-changing pool of podcasts, discussing the many aspects of training and nutrition possible. Most recently :
FoundMyFitness (Dr Matthew Walker on Sleep)


Over to you. Any you’d recommend?

It’s fair to say that we’ve checked out quite a few images over the years – on Flickr & Smugmug in particular.

A friend of mine just pointed me to Chris Stanciu ‘s Instagram feed, which contains a great mix of nutrition and workout images :

NB : if you’d like to share your own images, just add them to one of the sites noted above and send us a link.

I suspect you love talking about strength training constantly (certainly the case here), and you’re always on the lookout for places to do that. Comments on various sites, forums as well as various in-person communities.

Online, I gravitate toward both Twitter and Facebook. In addition to the SttB offerings, here’s another one you may wish to check out :

We’ve noted a few of his videos in the past, and they’re great for diving in deep on a particular type of equipment. Nice one.

I use Twitter for a number of things, as I’m sure everyone else here does. To talk about strength training, nutrition and many other topics. Works well.

To make this a little easier – and so people can dive right in to the topics that interest them – I use Twitter’s ‘List‘ functionality quite a bit. There’s a full list of them here :

Whatever you’re in to, it’s all there.

NB : the above lists are always being fine-tuned. If you know of someone who tweets regularly about a particular subject and should be on one of them, let me know.

Finally, for a daily dose of tangentially-related information – check out the following. All are compiled daily, and cover the following topics : If you’ve ever watched a Bruce Lee film and marveled at his strength, speed, agility, endurance, flexibility or muscularity, this book should take pride of place in your collection. Unlike many other writings covering everything from Lee’s training methods to nutrition, this book is based not on the recollections of people around him; but on Lee’s own notes. Brilliant.

Definitely worthy of a place on the fitness shelf.

Bruce Lee : The Art of Expressing the Human Body.

Monday, 27 Dec 2021
I’m constantly amazed at just how much my training is influenced by the people on this site. Whether you’re looking for a new piece of equipment, an unusual exercise variation or just an idea of how others approach things, you’ll enjoy these :

Over to you. I’d love to hear what you think : leave your comments on the above articles, and share them with your friends/colleagues/clients and so on.

NB : If you’re keen to do a little fitness writing and would like to submit your own piece for Straight to the Bar, get in touch.

Video : Learning The Hindu Push Up (Dand) (The Bioneer)

This is a great explanation (and demonstration) of the wonderful Dand, sometimes referred to as the Hindu Push Up. Great exercise.

We’re still finalising the details for this week’s discussion. I’ll post them on the blog (and Twitter, Facebook etc) shortly. In the meantime, take a look at some of the previous episodes of the show – (there’s an example below, and a full list here). And if you’ve got any questions or comments on the various topics discussed, we’d love to hear them. Just leave a note below the video. Vic Magary.
Previously : In Gymchat 136 we discussed Heavy Training After a Break with Online Fitness Coach Vic Magary and Personal Trainer Josh Hewett. Great conversation. NB : if you’d like to take part in a future episode – either as an interviewee, or as a guest host – just drop us a line. Love hearing how everyone else trains.

Interesting idea. The ProHandstand is an adjustable support, to help quickly stabilize things and learn the handstand. As your stability improves, just dial back the level of assistance. Simple idea. To see it in action, a little video : The ProHandstand.

If you've seen people using them but never taken the plunge yourself, here are the ones I use personally. You can also pick up a book/DVD/course if you want to learn how to put them to work.

Each week we publish a number of tips and techniques via Twitter, the blog; and the newsletter. Wherever you are, there’s always a way to improve what you’re doing. This tip is from Josh Hewett‘s excellent ‘Bulletproof Your Body‘ series. The impact of stretching on both strength and injury. Over to Josh :

Exercise physiologists have concluded that passive stretching not only has no effect on preventing injuries, but it can actually make you even more likely to get hurt. But I didn’t take their word on it… I’ve experienced the effects of passive vs. active stretching first hand. I’ve also worked with biomechanics specialists who use Applied Kinesiology muscle testing as a reproducible way to measure muscle strength and responsiveness. They demonstrated that in almost every case a passive stretch is performed the muscles will test weak after. On the other hand, active isometric exercise will improve muscle activation.

Good stuff. Note that this is only a snippet from the full piece – swing by Josh‘ blog for the entire article. A great read.

Unlock Your Hips, Unlock Your Squat I get a lot of questions regarding the impact of ‘unlocking your hips‘ on heavy squatting. Rick Kaselj goes into it in plenty of detail in the ‘Unlock Your Hip Flexors‘ program; and I’ve also posted a brief video below which demonstrates/explains some of the exercises. Both (working with Ryan, and Rick’s program) are highly recommended. And as always, we love hearing your feedback – if you sample any of the above exercises or the ‘Unlock Your Hip Flexors‘ program, we’d love to hear about it.

Exercise of the Week : Frog Jumps

This afternoon someone asked me what frog jumps were. Well, they’re fairly close to the ‘leap frog jumps‘ at the end of this video. Essentially just jumping in and out of a full squat; often up and down stairs. Torturous things – love them. Incidentally, if you’d like to get in touch regarding this or any other aspect of strength, you can contact me here. Look forward to hearing from you. 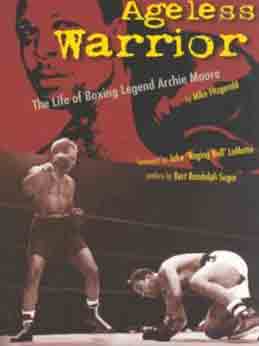 The Ageless Warrior
It’ll come as no surprise that we discuss a lot of fitness-related books; on this site as well as the various networks noted in the sidebar. The Ageless Warrior looks at the wonderful, incredibly long career of ‘The Old Mongoose’ – boxer Archie Moore. Superb. Incidentally, I’ve got an evergrowing list of ‘books to read‘, and I’m always looking to add to it. Suggestions welcome. There’s also a list of our all-time fitness suggestions over on Goodreads. Dive on in.